Sunny and about 78 degrees here in Kampala. Sleeping wasn't that great as I am just not used to sleeping under a net. No matter what I did, I knew it was there. The morning came well, with a slight breeze and it felt great. Of course, I was awakened by a call from the front desk saying that my driver was waiting. I guess he forgot I told him 9:00 every day except today. No matter as I was ready quickly and met him at the front desk. I asked them to change my room for me to one that had air conditioning so I wouldn't worry about the netting anymore.

It was great being at the Kampala office again. 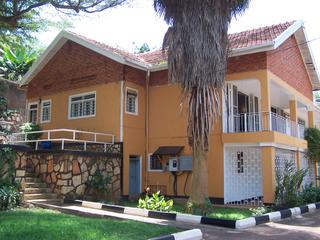 Its a nice building in a quiet part of town. The staff there are great and really spoil me. I use an office on the ground floor where I can open the windows (no screens) and let nature in. Despite being somewhat tropical and in Africa, nature does not include nuisance insects as it might in the US. Its just like working outside on a Spring day!

The day went by quickly. I got a taxi for a quick trip to Game (a store like Target) to pick up some screwdrivers I was going to need for the servers. I made a side trip into the Shoprite grocery for a few things to sustain me (Coca Cola for the office and water for the hotel).

Called it a day around 6:30 and decided to stay in at the hotel. They had moved me to a room with air conditioning, but I had to give up my veranda and outside table. 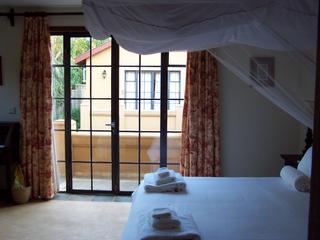 I was okay with that. A young lady from housekeeping came by for my turn-down service. Her name was Shenna (sp?) and was a university student working nights at the hotel. We had a good conversation about Uganda, India, and the future of East Africa in general. Her biggest concern is that the universities are pouring out graduates, but there are few jobs and the corruption and nepotism keeps qualified people unemployed. I wished her luck as she went on to the next room and I got back to work. Gonna make it a short night though.
Posted by Chuck at 1:28 PM