Dubai - every bit as good as they say

Dubai airport is a wonder. It's clean, modern, and full of wonderful shops with great varieties of merchandise. It is also set for a major expansion. The construction going on here appears to be destined to build terminals and hangars bigger than what is already in place. I guess it is becoming the hub of the Arab world.

My only complaint, and its a small one, is that the maps given to us on the plane don't match the gate numbering in the terminal. To add to that, the gate number I was given for my flight was incorrect. Then, we were unloaded on the tarmac and bussed to the terminal. The instructions on the bus were being read in English, but the volume was so low I couldn't understand. I got off at the first stop anyway under the assumption they would drop off connecting passengers first. I turned out to be correct. Then I had to go through another very thorough security checkpoint and the detectors sensitivity must have been set very high. They guy in front of me had a single coin, about the size of a penny, and it was setting them off. Until he realized it, I thought they were going to make him strip bare!

It even looks cool from the air. As you approach the airport, you fly in low over desert lands. They look just like in the movies except for the sprinkling of greenery. And, every mile or so there is a large plot that is all green. They have certainly done wonders with this land! 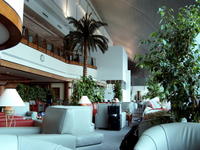 The airport lounge is also opulent. The business class area for Emirates passengers has a complete and full buffet as well as a fully stocked bar. Nice. If I wasn't fed so well on the flight I just disembarked from, I would dig in.
Posted by Chuck at 5:34 AM