More meetings today starting at 9:00. The forecast is 85 and rain.

Had my standard breakfast and met folks in the lobby. Then we had to go to the office location again, thus another interesting taxi ride. Afterwards, we went to a local Indian Restaurant called Lázeez Áffaire. The food was excellent. Funny thing though; they served Corona beer! I thought that a little peculiar to find in India at an Indian restaurant. 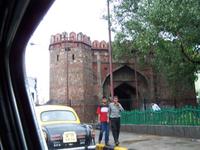 We drove around Delhi for a bit afterwards. We went past the Parliament, the President's Residence, the India Gate, the Bloody Gate (see photo on left), the old shopping district, and several other landmarks. We had to get back to the office site for a late meeting with some vendors. On the way back, we passed by the Police Memorial and the diplomatic area where most of the embassies are located; similar to Massachusettes Avenue in Washington DC.

We got there a little early and we had drinks in the cafeteria. I had a Pepsi and it set me back a whole $0.11. Not bad compared to the $3 at the hotel. I tried to buy a few extra to take but there are issues involved in the recycling of the bottles and such.

The meetings went well. On the way back to the hotel, the taxi driver stopped on the roadside. He got out, crossed the busy street to a vendor. He came back and handed me a bag that had a 2-litre bottle of Pepsi in it. My colleague had told him about the cafeteria. Extra tip for this guy!

I was back in my room at 6:00. I had calls to make later in the evening but decided to lie down and watch a little TV to unwind. I juped up to a knock on my door. It was housekeeping and they had mistaken my DO NOT DISTURB sign for PLEASE CLEAN MY ROOM. They apologized and I went back in to change TV channels. It seemed a bit dark in the room but the rains make it that way. I hit the lights and went to CNN for the latest when I saw the time was 11:20! Holy cow, I must have been more tired than I thought as I didn't even realize I had really fallen asleep!