More of the Same

Thursday morning. I didn't sleep a wink so was up an online really early. Today's forecast is 85 and rain. Even breakfast was the same as the last few days, with good food and good service, until you need the check.

Meetings in the hotel with vendors went until 3:00. One of them was the fellow from ICM (see earlier post) and they had dropped their price another 28%. But, get this. He says they use another company to provide local connectivity (last mile) and that company doesn't have fiber optic where we need it so they propose a copper cable solution instead. The odd thing is that the company they partner with is one of the vendors we have been talking to and they proposed fiber optic because it is already there and only needs to be run to the building from the street! Obviously these folks don't talk. 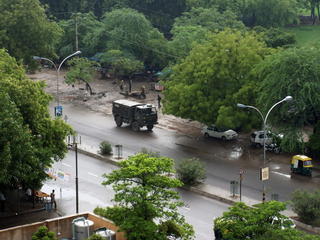 I did my usual window watching and it looks like bad news for the cows. A large Indian military truck was stopped in the street and several uniformed guys were trying to lift a cow into the back. The cow looked dead or stunned. Next to the truck, on the side of the road, was a small Suzuki with a really large dent in the front right that pushed up the hood. I am assuming the driver hit the cow and now the cow was going to be steak, burgers, and sausage for the military.

I had a headache and took an Advil. Then I made the mistake of lying down for a moment and, you guessed it, woke up six hours later.

I made my calls, wrapped up email, and completed reports and a prelim status report for the client.