Over the rivers and over the woods, to India I go 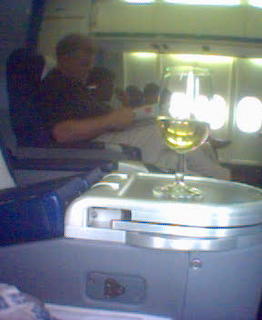 I waited in the lounge having orange juice and muffins for several hours since it was a 6-hour layover. I took off for my gate about an hour early as my last experience was that they forgot to announce my flight in the lounge. The gate area was packed with what appeared to be many families heading to New Delhi. I waited a little while and was amongst the first to board. I got settled in quickly and had my champagne to start off. We took off about 10 minutes late and I was on my way to India.

I'm not sure exactly why, but I managed to doze off almost right after I put my seat back. I awoke for dinner then nodded off again for a few hours. All in all, I think I managed about 4 hours sleep; a record for me on an airplane.

The movie choices were the same except I did watch Miss Congeniality 2 this time. Not a waste of time since I was a captive on the plane anyway, but if I had watched it at home I think I'd been a bit upset at wasting 100 minutes of my life. Oh, poor Sandra! How far we have fallen.

The flight was very uneventful, which is kind of good. We landed about 30 minutes late. Navigating the New Delhi airport proved to be pretty easy, but they could benefit by a few more instructional signs. Some things weren't all that obvious and people were headed in all different directions.

My bag came up with the first batch and I cleared immigration and customs pretty quickly. There were so many people in the arrival area that it took me quite some time to locate the driver holding my name up. He took me to his little diesel powered car and loaded my stuff. I noticed he was blocked in and was about to get a little frustrated at having to wait when he just started pushing one of the cars; it was in neutral! He then pushed the other car and had a clear path, though he did leave them in the middle of the parking lane after having pushed them.

It took about 30 minutes to get to the hotel 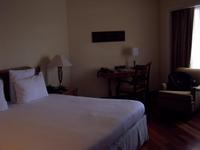 and I was pleasantly surprised and had decent expectations of my room. The hotel lobby is gorgeous and spaceous, with several restaurants and service areas all well appointed. When I got to my room, I thought they had mistakenly put me in a closet. The whole room can't be bigger than 10x12 feet, with a short corridor and a cramped bathroom. And they call this a "King room". I'd surely hate to see the "Prince room".

I took the time to unpack and get settled, and I noticed that the bed looks comfortable and inviting. Very inviting. It is comfortable so I am signing off to doze off.
Posted by Chuck at 3:25 AM