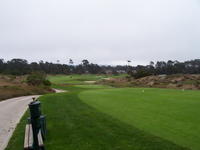 Tee time came faster than I expected. I barely had time to warm up at the Spanish Bay clubhouse. The clubs I rented were very nice Calloways and included a club for everything. I took an immediate like to the Heavenwood.

I was joined by two colleagues from the conference, Lee and Bruce, with our fourth missing. It was a bit odd as there was no registration or anything else; we simply had a tee time. We got our carts and started a few moments early. Having not played for a while and finding out my playing partners do play, I was a bit nervous teeing off on the first hole, but needn't have been. I managed to drive the ball right down the middle of the fairway about 200 yards. I was quite pleased. The remainder of the hole went okay, and did #2. On #3 I lost a ball off the tee, but wasn't too concerned as I had brought a dozen Slazengers just in case. 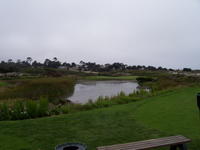 Well, but #13 I was down to just 2 balls left. I bought a sleeve off of the drink cart but by #16 I was down to a single ball. For those not familiar with Spanish Bay, there are a lot of environmentally sensitive areas and amateurs will find them as many are right along thin fairways or are actually obstacles for you to hit around or over. I sure found them.

The drink cart driver sold me another sleeve and I went off to finish my round. You know, its amazing how conservative you can get when you are down to your last few balls. I was pleased with my play though, given I haven't been out for a while. I shot 118 and my ball total was 19. How did I lose 19 when I only bought 18? Well, I managed to find a few abandoned balls along the way, and lost them as well. I actually finished without opening the last sleeve I bought, so I'll keep it as a momento.
Posted by Chuck at 11:14 PM