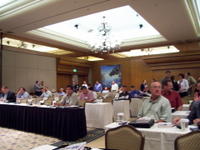 The second day started as the first did, with a breakfast and keynote. The rest of the sessions were well put together and done in a way to keep your attention as well. I did cut out for a little bit to check out of the hotel though.

We wrapped up around noon with a closing session by the CTIO of PBS (public broadcasting system) that was a pretty cool glimpse into what can be accomplished in a no-holds-barred atmosphere. Then a nice luncheon where awards for best Technology ROI were presented. They certainly seemed to be well earned and I think I'll nominate some of our projects next year for consideration.

We reluctantly left Pebble Beach, taking the long way out through Pacific Grove then stopping in Monteray to walk through Cannery Row. We stopped into a place for a beer and a view, but found the staff to be distant and not very warm. Otherwise, we would have probably stayed longer. We didn't have time to do the aquarium there, but it was highly recommended. 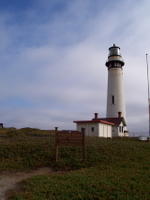 The highway back, first 68 then 1, was tightly congested until we got well past Santa Cruz. The scenery was as good as on the way down and we took time to stop at the Pigeon Point Light Station. There is a hostel there that is almost 100 years old and is still operating. The Pacific views were tremendous and you could see whales off in the distance.

As we passed through Half Moon Bay we started looking for somewhere to eat. I glimpsed a sign that said Miramar Restaurant and turned. It sounded like one of those great places you find off the beaten path. Well, it is a waterfront establishment that evidently started life as a brothel and speakeasy in the early 20th century. 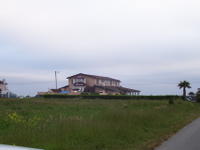 It's now a very nice and popular seafood restaurant. We didn't have reservations and almost couldn't get a table but they had a cancellation and were able to seat us. I had also mentioned that we had come 3000 miles which might have helped a little. They gave is a little table right at the front window overlooking the beach and the waterfront with a spectacular view of the coastline. The food was great; I had a seafood linguini while my wife had fresh Halibut.

It was getting dark and the rest of the ride was pretty smooth. We did manage to find our way back to the Fairmont Hotel. We got checked in and our bags brought up, then I had to go return the rental car. Finding the return was easy as it was on the same street (Mason), but at the bottom of the hill. That meant walking up the hill against a 15-20 mph breeze. I have to admit I was winded when I got to the top.
Posted by Chuck at 10:14 PM