Getting Around in Kampala

On my prior trip I had picked up some good experience dealing with drivers for hire. One things Americans must do is to check their assumptions at the door. It is easy to think that Ush 20,000 (appx. $11.50) is a good fare from one point to another, but it is probably double what a Ugandan would pay — maybe even triple.

I liked the service I got from the driver, Robert, who picked me up at the airport. Given that he was hired by Emin Pasha Hotel gave me some confidence as well. I negotiated a deal with him to be my regular “call” when I needed a taxi and, in exchange, he gave me a very good rate. He has also been on time every single time, and quick to respond for unplanned trips.

There are other ways to move around the city and country as well. A step down from a private hire is a “special” car. These are white cars with black stripes and a big “S” on them.

This reminds me of a joke I heard in the movie “Trading Places” (Eddie Murphy and Dan Akroyd).

A snail won the lottery and immediately went to the closest Cadillac dealer. He ordered a deVille and told them he wanted a big “S” painted on the hood and both rear doors. When the dealer asked him what he said that when he went town the street, he wanted to hear people say ‘Look at that S-car go!”.

Back to the story…

A recent addition to the Ugandan capitol are Yellow Taxis. These will be more familiar to most westerners as they are painted yellow, usually have TAXI lights, and are equipped with meters. 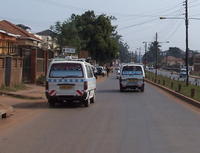 There are also Commuter Taxis. These are passenger vans, painted white with blue stripes or dash-like lines. They operate from the city’s main taxi stands and the road system is packed with them during the week as they are the main means of transport in Kampala. My opinion is they are also the single largest contributors to traffic problems as drivers jockey all of the roads in an effort to nab another fare. 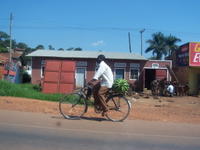 There are also the boda-boda. These are motorcycles, scooters, and even bicycles that take passengers for somewhat short trips for very small sums. They are popular for quick trips around communities and also for going into the areas where automobiles may find it difficult to traverse. Some boda-boda are even hired to carry cargo, such as banana stalks, lumber, and other supplies.
Posted by Chuck at 4:14 PM