Labor is Inexpensive in Uganda 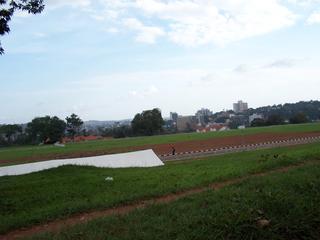 I have been driving by the Kololo Airstrip as I move between the hotel and the office. This airstrip is used by the President and also is the occasional setting for ceremonies. It was the center of celebration for the Day of the African Child in June for example.

On one of the days, while headed to the office, I noticed the almost constant whine of small engines as we passed the airstrip. My first thought was "radio-controlled planes" but I quickly dismissed that idea. Then I realized that it was the sound of a gas trimmer. Over the next few days the sound was always there, sometimes it seemed as though there was a "swarm" of them.

Well, today I finally figured it out. They have people who trim the grass for the entire airfield using just these trimmers; about 20 of them. I just couldn't see them the first few days because of a berm at the far end of the field.

Even though labor may be inexpensive here, I can't imagine why a good lawnmower wouldn't do the job. Even a simple 21" walking mower would have to be better than the fueling and upkeep of so many trimmers. I'll have to ask my Ugandan colleagues about it.
Posted by Chuck at 10:19 PM