The arrival at the airport went smoothly and after a short time, we were in a taxi on our way to the Fairmont Hotel. The driver was pretty typical for an airport taxi, doing at least 75 on the freeway and dodging around cars. There were two sections of the road, no doubt known to locals, where you feel as though you are on a boat or roller coaster do to the up-n-down motions.

The Fairmont is a nice hotel, one of the best in San Francisco, and this one is the flagship of the company. We were lucky enough for them to have a room ready even though it was still well before 11:00 am. We dumped our bags, did a quick change, then went off exploring. It was a wondrous day, with clear blue skies and around 70 degrees. 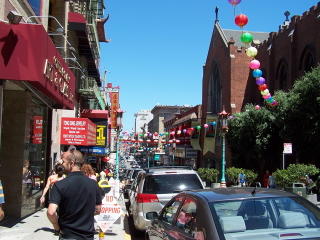 We went down Cathedral Street towards Chinatown, then made a side trip down Grant. This appears to be the main street in Chinatown. We only went a few blocks, browsed a few shops, then stopped in at the Floating Sushi Bar Restaurant for lunch. The food was good and we had the Teriyaki lunch specials, me the beef and she the chicken. I had a Sapporo draft beer to wash mine down with. This is a small place whose uniqueness is related to an island bar area where little boats go around the island loaded with Sushi. The cook/preparer works in the middle. It reminded me of the carnival game where you pick up a floating yellow duck to win a prize.

We continued our trek through downtown San Francisco, taking in the buildings and architecture and watching the cable cars pass, 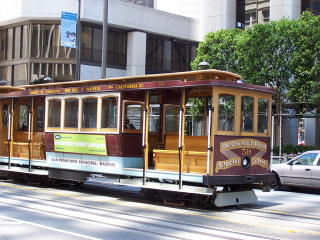 loaded down with tourists. It was a bit unusual for me to see so many really tall buildings since Washington DC doesn't allow them to go higher than the Washington Monument. Eventually, we found ourselves at the Ferry building, a nice area converted in a marketplace where you can catch the bay ferry across to Sausalito. It is right next to the San Francisco-Oakland Bay Bridge. It was also packed with people enjoying the beautiful day near the water.

We walked N-NE along the waterfront piers for about an hour until we came to Pier 39, an area chock full of shops and restaurants targeting the visitors to the city. There's a Bubba Gump Shrimp there, as well as a Hard Rock Cafe, about a dozen candy or coffee shops, and other places familiar from hundreds of similar tourist attractions. We walked the pier, browsed, watched the sea lions sunbathing, and got the view of Alcatraz from the end of the pier. On the way back, we made pit stops. I thought it a little odd that there was a long line for the men's room but not the women's room. I hadn't waited in a line like that since my college clubbing days, and very much the reverse from my normal experiences. 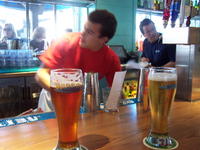 We decided to duck into Wipe Out for a beer at the bar. I tried the Wipe Out Ale in a large glass (which you get to keep). There was a guy next to us, Pete the peat salesman. He had obviously been there for a little while and seemed quite happy. Both bartenders were very friendly and entertaining. It was a nice time. After a trip though the gift shop (yes, I bought a t-shirt) to get our glasses to take home, we hopped a cab back to the hotel.

Now, it was around 5:00 local time, and my wife was still on Eastern so it seemed like 8:00 or so to her. Meanwhile, I am still running in Ugandan time so it was more like 3:00 in the morning to me. Add to that having less then 5 hours sleep since Thursday morning, I was beat. I decided to take a short nap to recharge my batteries before we headed out for dinner.
Posted by Chuck at 11:14 PM