A Terrible Farewell to Uganda

Robert was right on schedule with the care and after checking out at 6:00 we were on our way to the airport at Entebbe.Kampala looks different when dark and deserted as it is this time of morning. I noticed the full moon in the sky and hoped that it didn't mean that strange things would happen all day. The trip was quiet and uneventful, UNTIL we arrived at the airport. At the first security checkpoint, the 3 well-armed men approached the car and the leader told the driver to step out. He then opened the back door and asked me if I knew that Uganda had very strict laws about seatbelt use. I showed him that my seatbelt was on. He said it was on "incorrectly" and ordered me to step out of the car. Shakedown time.

I exited and took in my surroundings. No other cars, no buildings, no people, and we were not in view of the terminal. I asked him what the usual fine was and he said that the passenger was fined 20,000 shillings (about $12) and the driver 100,000 shillings (about $60) which, since I hired him, I would have to pay. I told him all I had was 23,000 shillings and asked him if it was enough. He said something to the other guard and then said it would indeed be sufficient. So I gave him the money and we were sent on our way to the terminal.

Pulling up to the departure area, Robert got out and just kept saying "thank you sir, thank you sir" over and over again. I looked for a security booth or airport management office to report the incident but didn't see anything.

I went through the whole check-in process at the airport where I ran into another small glitch. I presented my passport and original ticket receipt in order to gain entry to the counter area. They wouldn't let me pass because my receipt indicated my flight was on 7/18, my original departure date. I explained the change but they wanted to see something on paper. I said it was an electronic ticket anyway so the paper was not the important thing. I had to ask them to get a British Airways person to clear it up. After all, how do they address electronic ticketing here?

An official with British Air came over and quickly cleared up the situation, allowing me in. When she saw that I was flying Business Class, she offered to escort me. On the way to the counter, I told her of the shakedown at the security checkpoint on the airport road and asked her if there was someone I should report this to. She chuckled and said that this was Africa and there was little to be done about such things. The news accounts, travel reports and guide books all speak of this sort of thing occurring in many African countries, but I had no reason to expect it in Uganda. Well, it was a bad experience but at least they settled for the shillings and didn't search me or my bags. After check-in, I made a beeline for the lounge and had a bourbon and coke, then a second one a few minutes later. It helped some.

The boarding call for my British Air 9:10 flight came at 8:30, so I went to the gate and past the checkpoint. There, we all waited until they actually began boarding, which didn't start until 9:30. So, we took off about 45 minutes late. The pilot said we would make up the time and then some, arriving early at Heathrow. 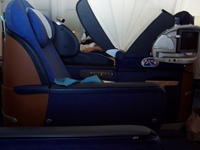 The plane was recently refitted and had the new lounging/sleeper seats in Club class. These are great, with complete reclining and personal video setups. This shouldn't be a bad flight at all.

A woman was traveling with 2 very small children who took turns crying for almost the entire 8 hours. Everyone in Club class was going nuts over it. Folks couldn't sleep and others, including me, couldn't even hear the video with our headphones on, I wonder what the rest of the day has in store?
Posted by Chuck at 5:14 PM