We had tickets for the Alcatraz Tour at 11:45 so decided to head to Pier 39 for breakfast. We found Chic's offering a decent menu and ate overlooking the water and sea lions. We then killed a little time in the tourist traps where I bought some postcards for us to mail. 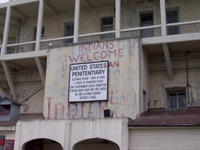 The ferry ride was pretty smooth considering the chop on the bay waters and we were soon on Alcatraz. It was an interesting time on the island. Let me warn everyone about one small thing though. Once you board the boat, they bombard you with the fact that there is no food or drink for sale on the island so you can buy stuff at their on board snack bar. Then, just before docking they announce that there is bottled water for sale on the island and that the only place you can eat food or drink is at the dock. Later, you find out you can drink bottled water throughout the island.

The audio tour takes about 30 minutes. You get to see where Al Capone was kept, and all sorts of other facts. The tour is very light on the history of the island prior to being a federal prison and only briefly mentioned the Native American occupation. 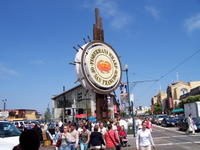 On returning to San Francisco we walked the waterfront and had lunch at Nick's on Fisherman's Wharf. Then a brisk and uphill walk back to the Fairmont. I didn't have much trouble with the hills but my wife had a real problem with them. The few times we tried to grab a cable car, they were all full. We did stop along the way and picked up some tourist fodder like t-shirts and few little things for gifts.

After a few hour rest we hit the streets of San Francisco (been wanting to say that) and headed for Chinatown. We wandered Grant Ave and browsed some shops, bought a few things that we probably could have found at stores back home for less, but this is Chinatown after all! After seeing all of Grant Ave, we visited some of the side streets until we found a cute little restaurant for dinner. The pork fried rice and sweet and sour chicken was delicious. The Tsingtao beer was cold and went down well. The prices weren't too bad, but more expensive than restaurants at home. A short walk back to California Street was in order and I had promised we wouldn't walk the hill this time. We waited for a cable car. It took about 10 minutes before one came along at this time of night, but it did have room. Despite the poster and costs posted inside the bus shelter, the ride was not $2 per person, but $3 per person. Good thing I had the extra dollar bills. After a short ride up the hill to Mason Street, we hopped out at the hotel wrapped up the day.
Posted by Chuck at 8:14 PM